Hope Elizabeth May, Professor of Philosophy at Central Michigan University, and Director of the Cora di Brazza Foundation, talks with Judy Wagley about A multi-faceted project that is in progress this week. It begins with a replica of the Portrait Monument to the Suffrage Pioneers, a statue on display at the Art Reach of Mid Michigan Gallery in Mount Pleasant until August 28, part of the 2021 Art Walk Central.

2021 marks the 100th anniversary of the unveiling of the original statue that is a monument to equality and human rights. The piece was created by Adelaide Johnson and completed in 1920. It features likenesses of Suffrage Pioneers Lucretia Mott, Susan B. Anthony and Elizabeth Cady Stanton. It was unveiled in the Rotunda of the United States Capitol in 1921, commemorating the passage of the 19th amendment on August 26, 1920, which granted women the right to vote. The statue was later relegated to the Capitol’s “crypt” and remained there until 1997 when it was raised back into its intended place in the Rotunda.

There are many stories surrounding the creation, transportation and installation of the statue. May shares some of the highlights and explains why this work of art is relevant and significant today.

May also extends an invitation to two “Memory Parlors.” She said these gatherings are a nod to earlier “Suffrage Parlors” and designed to offer “social intercourse and the exchange of intellectual products,” as well as serve as a “means of stimulating dialogue and reflection through which the connection between past and present is brought Forward into Light.”

On August 26 and 27, Sandra Weber, foremost expert on the Suffrage Statue and author of The Woman Suffrage Statue, will speak at two Memory Parlor events at Art Reach of Mid Michigan, 111 East Broadway in Mount Pleasant. 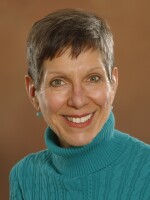 Judy Wagley
Judy joined WCMU's staff in December 2018. As producer and host of “Afternoon Classical Music,” she wants to share her life-long love of classical music with listeners, and have some fun along the way! She is also the producer of “Central Stage.”
See stories by Judy Wagley
Help keep your favorite programs on the air!
Donate Your Car!
Community Calendar