Listen to this week's show: 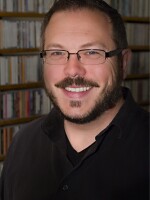 Rick Westover
Rick Westover began his career at WCMU in 1999, when he was hired as a student host of 'Nightside Jazz and Blues.' He also began reading local news and weather during the noon hour, which led to a full time position as local host of 'All Things Considered' in 2004. Rick won a pair of "Best in Category" awards from the Michigan Association of Broadcasters before moving to music in late-2006.
See stories by Rick Westover
Help keep your favorite programs on the air!
Donate Your Car!
Community Calendar