When her husband Mark was diagnosed with vascular dementia in 2014, Brenda Roberts became immersed in the world of dementia.

“I spent 40 years of my career working with older adults, including then, of course, persons living with dementia,” Brenda said. “But my education didn't start until Mark was diagnosed eight years ago.”

Instead of finding pamphlets of information about dementia, many people receiving a diagnosis struggle to find information.

“What we hear consistently from people living with dementia, is they get their dementia diagnosis," Brenda said. "And they're told to go home and get your affairs in order. And so these people leave as we did, just feeling hopeless.”

For Mark, he felt like he was battling a death sentence.

“I was just devastated,” Mark said. “I was ready to crawl in a hole and die, but I'd have to lay there for a lot of years before I die.”

According to Mark, doctors are behind in their knowledge of dementia which makes it hard to wrap your mind around.

“When you go get diagnosed, it's really a tough thing because the medical background for many of these folks have no idea of what it's like to have dementia,” Mark said. “I mean, you know, if you are a cancer patient, doctors have worked with them for 50 years and understand a lot of the different things that you may complain about.”

After years of struggling to find support, the Roberts took control of their own destiny and formed a group.

Starting with eight people, living with dementia, The National Council of Dementia Minds was formed in 2021 to help patients and their families deal with a diagnosis. Brenda is the council's executive director.

With a board featuring people living with dementia, The National Council of Dementia Minds began small but has picked up steam through these events, which include a unique question-and-answer segment.

Brenda said not only do they provide a voice to dementia patients, but they’re also helping family members gain an understanding of dementia and what it means.

“When we started, I started listening to people living with dementia,” Brenda said. “And now, like, oh my gosh, I have this new understanding and appreciation for their experience.”

Due to the popularity of the council, Brenda said they’re ready to form five new groups throughout Michigan to better serve those with dementia.

For more information on The National Council of Dementia Minds and their new groups, visit their website. 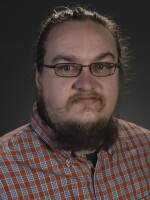 Sean Chase
Sean Chase is from Newaygo, Michigan. He is a senior at Central Michigan University pursuing a journalism degree.
See stories by Sean Chase
Help keep your favorite programs on the air!
Donate Your Car!
Community Calendar