A small Midland county town will turn into a movie set this summer as a Sanford actor is gearing up to film his first movie in his hometown.

Chris Krause acted in New York for six years. That is where he wrote the first draft of the horror movie, Followers, in 2018. Three years and a pandemic later, his vision is coming to life. He will act in and produce the film alongside director Jerry Aquino. He said the unfortunate flood damage that still remains from last year is ideal for a post-apocalyptic world.

Krause said he chose the genre, in part, because he feels the best horror films are a reflection of society. In this case, a zombie infection is a metaphor for racism and similar kinds of systemic hate.

“You know, we’ve realized that we’re - to put it frankly - probably the most divided we’ve ever been, and trying to find ways to have conversation is incredibly hard,” he said. “You know, my favorite kind of movies are the ones you watch and you go ‘hey that was cool’ and you start talking about it and it creates conversation.”

Krause said he’s raising money now through a GoFundMe. He said shooting starts August 15 and will continue for 20 days.

In the meantime, he and his colleagues are gaining fans on social media. The Tik Tok account is from a prequel to the movie, from the perspective of the main characters, married couple Pete and Ash.

They are played by Chris and his girlfriend/producer, Megan Meyer.

Meyer said they wanted to do a modern day version of the Blair Witch Trial - a horror movie that at least some viewers think is real.

“We spent about two weeks and basically trolled the Internet by making them think we're hearing this noise in the woods and scary things were happening to us and within 2 weeks we had over 200,000 followers and kind of went viral on some of our videos,” she said.

Aquino, from New Jersey, said the land in Michigan is great for movies like this, and even other genres.

“Just the landscape, the ruralness I think is beautiful. It’s a goldmine for fiction films, zombie films,” he said. “Whatever narrative that caters that landscape, you know wooded… there’s a lot of things you can do.” 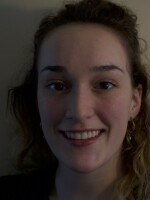