Preserving more than just a game

Video games have been around for more than fifty years, but it’s only recently that people have started to preserve their history.

People might remember the sounds of Super Mario Brothers on their Nintendo console. Others might remember the loud scream of “Sega” when they started up their Sega Genesis. These are sounds that might bring back memories and nostalgia.

“Retro sells - I mean, nostalgia sells. It's like that old saying, ‘If you can't sell in the present, you can sell in the past’,” said Gaige Tarsney, owner of K-otic Games in Alpena, Michigan.

K-otic Games specializes in retro video games that people sell so he can resell them.

Tarsney says as time goes by, certain games are harder to come by and become more expensive.

“I think within the last two or three years within the pandemic time, a lot of people are sitting at home,” he said. “So, a lot of people started digging through stuff they used to have and started, you know, listing things online because I think people did need money.”

For Tarsney, this can always be a good thing: higher prices mean higher sales. However, it drives people to a quicker and cheaper option.

“The downside is, the higher it keeps becoming, it also kind of steers away the general consumer from wanting to get those games,” Tarsney said. “Which could push them more towards emulation or digital downloads, because normally, it's a lot cheaper and more convenient.”

In the 50 years since Pong was released, video games and technology evolved and only became more complicated. Games can now be bought digitally, with some being sold exclusively online.

Capcom, a large third-party video game publisher, reported that their digital game sales in 2021 made up about 77% of all total game sales.

But what if those digital-exclusive games disappear from the online store?

If you were a fan of the games that disappeared, you may have hope that someone backed it up for others to play. However, some games meet a darker fate, one that doesn’t allow gamers to play them again.

“It's kind of a glorified rental,” Tarsney said. “Because even if these companies decide to delist these games on their digital markets, we're starting to see these days - once gone, those digital purchases are gone. Like you don't have any real proof of you actually owning it, you know, minus receipts.”

An example of this unfortunate fate was Scott Pilgrim Vs. The World: The Game.

Scott Pilgrim is a popular comic that was adapted into an arcade beat-em-up-style game by game publisher, Ubisoft, in 2010.

By 2014, Ubisoft’s licensing for the adaptation expired and it went down, leaving gamers to wonder what happened and how they can play it again.

After 7 years of petitions and demand for Scott Pilgrim to be re-released, Ubisoft brought the game back.

To make sure the same fate never happens to the game again, Ubisoft partnered with LimitedRunGames, a physical game publisher, to publish Scott Pilgrim on a disc.

“Nobody from Sony is going to come in your house and take your PlayStation four discs from you. But they can take your digital downloads and that's not forever,” said Josh Fairhust, Co-Founder of LimitedRunGames.

In 2015, Mighty Rabbit Studios was publishing games digitally for the PlayStation 4 and its mobile sibling, PlayStation Vita. Things weren’t looking great financially for the studio and Fairhurst says he didn’t want his games to be lost in time.

“I looked back at what we had poured our kind of souls into making, and realized that at some point, because these games were all just digital, that they would disappear, and nobody would ever remember we were there,” Fairhurst said. “ It gave me this desire to make these games into a physical form, because physical games seem to be remembered. Digital games just kind of fade into memory faster, because they're not being traded. They're not being remembered.”

When he came to this conclusion, Fairhurst made what he calls a very risky decision.

“I took a personal loan out against my house, it was an $85,000 loan, very high risk, if things didn't work out, I would lose everything I had,” he said. “But I took it out, because I believed in this and I used it to run “Breach and Clear’ in physical form on the Vita. And I was just hopeful we'd find an audience. And sure enough, we did.”

Since his risk, LimitedRunGames is now recognized as a place for large developers to physically release digitally exclusive games or re-releases of older titles. K-otic Games partnered with the publisher to sell products at Tarsney’s store.

“We actually had a really big developer reach out,” he said. “It was Oddworld Inhabitants, who had developed Abe’s Odyssey for the PlayStation One, one of the biggest games on the PS1. And they had reached out to see if we wanted to work with them, which was pretty surreal.”

Fairhurst says one of the biggest obstacles he faces trying to re-release older titles is finding the game’s original assets … things like concept art and development materials can be hard to find.

Fortunately, the Video Game History Foundation has been collecting these pieces of history.

“We can go to the big game History Foundation, say, ‘Hey, do you have anything in your archive related to this game?’,” Fairhurst said. “And they'll be able to say, ‘Oh, yeah, it was on the cover of this Game Pro.’ And then we'll be able to go from having no art assets to all of a sudden, hey, we've got all of the original assets, because the video game history foundation had preserved that media from these old game magazine publishers.”

The history foundation is a non-profit based in California. It doesn’t collect games. Instead, it collects things like records of development history and the source code of games.

Foundation co-founder Kelsey Lewin says she came to the group with a sense of frustration as a historian because so many video games were lost in time.

“In the 80’s, 90’s, even up through like the early 2000s there really was no concept of a remaster or a rerelease, or really just any kind of secondary life for a video game,” Lewin said. “Once it had, you know, made it onto a cartridge and hit the shelves, that was kind of it and you've moved on. So a lot of this stuff did end up literally in the trash.”

The foundation’s projects include digitization of video game magazines, interviews with pioneer developers, and so much more.

Lewin says that playing the game is only one factor of a multi-faceted story.

“Any game that kind of came on, like a cartridge or a CD is out there, and can be purchased, you know, either secondhand or found in other ways,” she said. “And, you know, that's a great start for preserving the medium. But it's not really enough to tell the story.

“So, we are in service to sort of the storytellers at the foundation. We want to make it easier for people to research this stuff, for people to write good articles and stories and documentaries, and all of that, and to really explore the history of this medium.”

The Video Game History Foundation is only two weeks into its next project: giving the public access to the digitized history of games.

“We are in the process of really building out the digital archive, and it's sort of the front end for people to be able to get their hands on these materials and use it. If you have access to those, you're going to be able to tell some really, really fascinating stories and I'm really excited to make that easier for people.”

Video games are about more than just playing them. There’s a large history of art, music, and code that’s left to be thrown away. It takes stores, publishers, and historians to collaborate to keep gaming history alive.

Fortunately, it seems they’re up to the task. 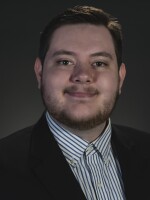 Michael Gonzalez
Michael Gonzalez is a fourth year at Central Michigan that majors in journalism. He is from Pinckney, Michigan, will be an intern for WCMU and the Alpena News this summer.
See stories by Michael Gonzalez
Help keep your favorite programs on the air!
Donate Your Car!
Community Calendar