From mothers and fathers to members of the NRA, people of all politics agree that gun owners need to Be SMART about safely locking away their firearms.

The volunteers are not preaching their politics, but rather spreading information to minimize gun accidents.

“I grew up in a hunting family, but gun safety was always paramount,” said Karla Castellanos, a Midland volunteer with the program.

She recalled an incident from her childhood in which she could have shot her grandfather.

“I saw the look of terror on his face and my mother's face and I was like, ‘whoa, this isn't a toy’,” she said.

The almost-catastrophe made Castellanos want to get involved with educating others about the importance of gun safety by tabling with Be SMART.

Volunteer Chris Klykken views gun safety education as a precaution similar to child-proofing your home, wearing a helmet on your bike or a seatbelt in the car.

“We're here to help educate people to add that to the list of things that keep our lives safer,” Klykken said.

Not a political issue

When tabling at a previous event, Klykken was approached by a member of the NRA, who initially said he wasn’t concerned about the Be SMART initiative because his children are well educated on the topic.

Klykken thanked the father for taking action to model gun safety for his own children, but she was prepared to give him the information he needed to take his precautions a step further.

“If a child comes to your home, and hasn't been given the education, how do you know how to monitor that child?” she asked. “Or if your child goes to somebody else's home, and you don't know whether they follow the rules that you follow, how do you monitor that?”

Klykken said her discussions tend to be an “ah-ha moment” for many gun owners who might overlook the dangers of having an open weapon in the home.

“Just 30 seconds into me talking to him, he realized, I am not political. I am not trying to remove his gun. I support the Second Amendment,” she said. “But we're here to prevent accidents. And who can argue against preventing accidents?”

What does it mean to Be SMART?

The first word -and one of the most important words in the Be SMART acronym- is “secure”.

Like hiding away Christmas presents, volunteers from the Be SMART program said parents are “fooling themselves” if they think a gun in the home won't be discovered by curious kids.

“That's one of the things that we've heard over and over again from police officers, is if there are guns in the home, children know where they are,” said Kathy Kinkema, a volunteer group leader in the Great Lakes Bay Region. “The real issue is making sure that they are locked and that the ammunition is locked, separate from where the gun is stored.”

Modeling responsible behavior around guns is the second point in the acronym which is crucial to help kids understand what to do when in the presence of a gun.

The next step in being SMART is to ask. Volunteers said it is important to be informed about any unsecured firearms when visiting someone else's home to ensure the safety of yourself and your kids.

Among many resources on the Be SMART website, there is a convenient list of ways to go about asking the firearm question without seeming invasive. https://besmartforkids.org/wp-content/uploads/2012/10/Asking-About-Secure-Gun-Storage_06.2022.pdf

Volunteers want people to recognize that firearms have become the leading cause of death for children in the United States. This is not only from murder or gun accidents, but also from suicide.

“The unfortunate aspect about suicide with gun is it's almost always successful,” Klykken said. “If you find a child that maybe has taken some pills, you have a chance to save that child. So that's why you need to recognize and you need to be aware.”

The R in SMART stands for recognizing the risks of teen suicide with a gun in the home.

The final T in SMART is to tell: Volunteers said gun safety should start with a conversation in your own home, within your own network of family and friends. 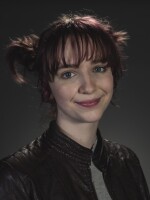 Jill Harrington
Jill Harrington is a senior at CMU majoring in journalism and minoring in theatre and interpretation. Jill grew up in Novi, Michigan and started reporting for WCMU in summer 2022.
See stories by Jill Harrington
Help keep your favorite programs on the air!
Donate Your Car!
Community Calendar